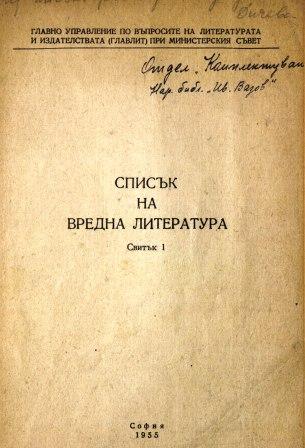 The first “List of Fascist Literature” subject to confiscation according to the 12th Enactment of the Council of Ministers of October 6th 1944 (Official Gazette, issue 225, 1944) was compiled by the Ministry of Propaganda. According to it, the state confiscates all books “of pro-German and generally fascist and racist nature, as well as books against the Soviet Union and the freedom-loving peoples, no matter who wrote them, where they were written, or where they are kept”. According to section 3 of the Ministry of Propaganda Regulation №10 of 08. 06. 1945, signed by Dimo Kazassov, “Books are not to be confiscated from public libraries, the university library, and the libraries of the higher cultural and educational institutions. Books of religious content are not to be confiscated, as well”. This does not apply to the remaining libraries – community centre libraries, school libraries, libraries at military units, etc. The private libraries of individuals sentenced according to the Ordinance Law of the People’s Tribunal, are to be sealed and made an inventory of by the People’s Militia authorities. Later on, other “Lists of detrimental literature” were made. In one of those, dating back to 1950 and compiled by the Committee for Science, Art and Culture on the basis of Ordinances 7207 (22.VII.1949) and 67, 68, 69 and 70 (13.I.1950), it is again mentioned that books are not to be confiscated from public and university libraries, but their usage may only be allowed for educational purposes and authorized by the library director.

That marked the first occurrence of secret book-stocks in Bulgarian libraries. A curious fact is that there was actually a “Book of regulations for the tasks, structure of and work with the s p e c i a l library book-stocks”, but they became better known as secret book-stocks. Section 2 of the Regulation states that “In order to restrict the use of incriminated and other detrimental printed materials only for scientific purposes and reference by a definite circle of users, to provide control over the preservation and use of these printed materials, and to distinguish that activity from the general activities of libraries, special book-stocks are to be created at “Vassil Kolarov” Public library, “Ivan Vazov” Public library in Plovdiv, Varna District Library, the libraries of the Central Committee of the Bulgarian Communist Party, the Cabinet Council, the Bulgarian Academy of Sciences and the Ministry of Interior, in accordance with Ordinance P-40”.

An Ordinance of the Cabinet Council, published in 1956 as a supplement to Ordinance P-40 from 1954, allowed the preservation and use of incriminated printed materials – in conformity with their profile and provided there were conditions for organizing special book-stocks in agreement with the requirements of the Regulations – in the following libraries: the University library, the libraries of all higher educational institutions, BAS (Bulgarian Academy of Sciences) institutes, the departmental research institutes, the Ministries and central departments, district libraries, Sofia City Library, the libraries at the central offices of community organizations and the district committees of the Bulgarian Communist Party.
Thus, in the 1950s, started the gradual formation of secret book-stocks in Bulgarian libraries, based on the incessant publishing of lists of incriminated literature. The lists were compiled by the Ministry of Culture, the Committee of Science, Art and Culture, the Directorate of publishing and printing industry and trade and the Head Office in charge of Literature and Publishing (Headlit). Besides, the Book of Regulations allowed library management to suggest “ideologically detrimental books” for approval by Headlit. That presupposes certain differences in the secret book-stocks content of the different libraries. The differences were perhaps insignificant in the case of Bulgarian books, but most probably vast when it comes to foreign books.

In 1994 the Reference and Information Department started work on an electronic catalogue of the former Secret Book-Stock of “Ivan Vazov” Public Library. That had to be done because the catalogue of the Secret Book-Stock wasn’t preserved. Under social influence and for the purpose of the faster secret book-stock disbanding, the catalogue cards were used for compiling topographic card-indexes, for inclusion into the general alphabetic catalogue, etc. A very small part of those books – only those published in 1960 – was included into the Users’ Subject Catalogue. Thus, our users were left with no information about the contents of the Secret Book-Stock (SBS) in the Public Library, and the library itself went short on the opportunity to analyze the book-stock that had existed for forty years – not an inconsiderable period in the history of the library.
A total of 531 foreign book titles had been classified in “Ivan Vazov” Public Library. The largest was the number of books in German – 218, in English – 129, Russian – 65, Serbian – 62, French – 42, Italian – 7, Turkish – 3, and 5 in other languages. The books published prior to 1944 were 221 (184 in English, German, French and Serbian, and 37 in Russian and Macedonian) and had been classified in the period 1952–1968, plus 94 more in the period 1968–1980. The smallest (15) is the number of books classified in the period 1944–1952, followed by the ones classified after 1980 – 24 titles. As expected, after 1944 the classified books in English and German prevailed in number; most of them had been donated or acquired through book exchange and immediately joined the secret book-stock.

When it comes to content, most of those books were about politics, economy, and philosophy of the “fascist countries”. Plenty of them were in Macedonian and Serbian, concerning the Macedonian question, Tito’s policy, his persona, etc. There were also a considerable number of books about the coup in 1917, as well as ones criticizing the Marxist-Leninist philosophy. The Secret Book-Stock (SBS)included also books on other philosophical trends. Some cases could be cited here that are indicative of the contents of the former SBS of foreign books. Some of them were published in Bulgaria: Дехтерев, Александър. С детьми эмиграции 1920-1930 годы \А.Дехтерев. - Шумен : Библиотека педагога, 1931. – 128 с. The book is about the preparatory school at the Russian High School in Shumen, where the children of the white emigrants went. The most probable reason for its inclusion into the SBS was the questionnaire therein and the kids’ answers that they felt Russian, that they loved Russia, but they could not go back there, because “... теперь там коммунисты. Теперь там все плохое: убивают, режут. Там война.” (с.113) (“… the communists are there now. Everything is bad there : they kill, slaughter. There is war going on there”). A couple of similar answers had become the reason for the book to be made inaccessible to library users that were interested in the problems of white immigrants in Bulgaria. Another published in Bulgaria book was: НИКОНОВ-СМОРОДИН, М.З. Красная каторга : Записки соловчанина / М.З.Никонов-Смородин ; Под. ред. А.В. Ам-фитеатрова. – София : Издательство национально-трудового союза новаго поколения, 1938. – 371 с. It is a documentary book about the Soviet convict prisons, where the author had spent 6 years and 2 months before escaping to Finland. The book is supplemented with a facsimile of his sworn statement that everything written therein is true.

And if those books were frankly discrediting for the former regime, the reason for the classified phototype edition of a textbook of the University of Sofia – МЕЖДУНАРОДНОЕ право в документах / Сост. Н.Т.Блатова. – Москва : Юридическая литература, 1985. – 856 с. – is utterly inexplicable. It could be assumed that it was because of its section on “International Acts for Human Rights”. Bulgaria learned rather late about the mentioned acts. Also classified in 1987 was: О новом теоретическом видении социализма. – София: Инст. истории БКП при ЦК БКП, 1987. – 380 с. (“On the new theoretical concept of socialism”). Although there was some talk in Bulgaria about reformation, the claim that the Stalin model of socialism still ruled in the Soviet Union and that the Marxist-Leninist model of Socialism needed to be revised had perhaps upset somebody, because the book was classified “For Official Use Only!”.
The book byf HORTON, Rod et al. Backgrounds of American Literary thought / B. Horton, Gerbert Edwards. – 3. ed. – Englewood cliffs: Prince-Hall, 1979. – 630 p. had remained in the SBS for 11 years as it has a chapter on Marxism, which seems to be the basis of American literary thought alongside black humor, pornography, etc. Other examples of classified books are: ABCARIAN, Gilbert et al. Contemporary political system / G. Abcarian, George Masannat. – New York: Scribner, 1970. – 387 p.; a textbook on the different kinds of political systems, as well as a book by HANNA, Thomas. Bodies in revolt : A primer in somatic thinking / Thomas Hanna. – New York : Delta book, 1972. – 308 p., which is a book about the different schools of philosophy. In other words, no diversion from the officially adopted dogmatic thinking was allowed. Part of the SBS at “Ivan Vazov” Publiv Library wass also Ilker ALP’s “Bulgarian Atrocities : Documents and photographs / Ilker Alp. – London ect. : K. Rustem & BRO, 1988. – 246 p. : ill.”, in which the Turkish professor claimed that the Turkish people in Bulgaria had been suppressed ever since the time of the Russo-Turkish War till the moment the book was published. Whether this was true or not, only historians could pass a judgement, although after the events of 1985 there could hardly be any objections raised.

This short article does not cover all books from the former SBS at “Ivan Vazov” Public Library. The completion of the online public access catalogue will make it possible to work out a detailed analysis on subject-matter, years of publication, languages, authors and etc. Moreover, it will allow the publishing of a catalogue of the book-stock which will serve as a document about a definite period of the library history. It has to be mentioned that there are plenty of absurd and even funny moments in the formation of the book-stock. For instance, some of Nikolay Berdyaev’s works were included in the SBS, but the Bulgarian edition of “Socialism” (1935) was never in the SBS, perhaps because of its innocent title. Everyone more or less familiar with the works of the Russian philosopher would never allow such an “oversight”. Jerome Jerome’s book “The New Utopia” (1900) was never present in the SBS; and it is a book about the horrors a socialist experienced while dreaming that his ideas have come true. The SBS did not include many periodicals which published materials contradictory to the official “thought” of the time.

All this proves that the lists according to which the secret book-stocks were formed were not compiled by proficient bibliographers, but by undereducated people who limited the people’s right to be informed and the right of choice of Bulgarian readers in the course of forty years.